It’s  been pretty quiet at the Beauty Basics corner of The BookBandit Blog, hasn’t it?! I do apologize for my lack of posting. No excuse, I simply forgot to post. So, sorry guys!

But we’re back to our regularly scheduled programming!

Christmas was this past Wednesday. As any aspiring beauty expert knows, it’s the best time to ask for some makeup and beauty related products. Now, I wouldn’t say my Christmas list was chock full of beauty/makeup related items, but there were a few here and there that I hope Santa would bring.

Well, Wednesday came, and as I tore open what was left under the Christmas tree (and in the stocking, can’t forget about the stocking now can we?!?) I found many delightful surprises.

So, what did Santa leave under the tree for me? 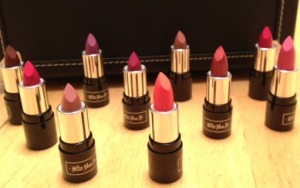 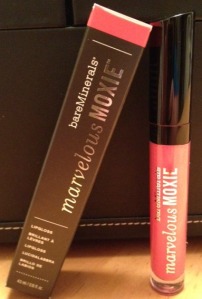 Bare Minerals Stop, Look, & Glisten set which contains 2 shades of  eyeshadow – one is in the shade Embrace which appears to be a pearl/champagne color and the other is called Flicker which seems to be a purple-ish/plum, and another Marvelous Moxie lip gloss is Style Setter 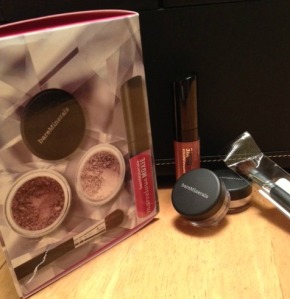 And a (professional looking) Caboodles Make Up Trunk

Of course it wouldn’t be me if I didn’t buy a few things here and there for myself. So, what did I buy myself? Well…

The Bare Minerals Show Me The Shimmer 5 Piece Lip Gloss set in: 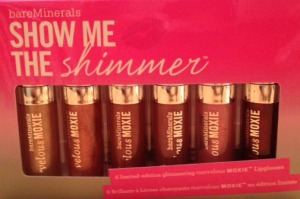 Santa was very good to me this year! Readers, I hope you all had a very Merry Christmas and have a very Happy and Healthy New Year as well!

What (makeup/beauty products) did Santa bring you?!

So yeah … I went a bit overboard. I bought one too many lipsticks. Granted I didn’t buy all of these at one time, I purchased a few here and a few there. But still, there’s quite a few.

In total, I’m going to be talking about the five lipsticks I purchased over the past few weeks, and the three lip glosses I bought alongside those lipsticks.

For the past few weeks or so I’ve been eying Rimmel London’s Lasting Finish Lipstick, the Kate Moss edition. I’ve been eying the Lasting Finish Lipsticks for several reasons. One, I like Rimmel products. I use their BB cream, their eyeshadow primer, and even their Apocalips lip glosses. Two, because I like their products that I’ve already been using I wanted to try a Rimmel London product that I have yet to try. And three, the shades in which these lipsticks come in are simply beautiful. From bold reds to subdued pinks there really seems to be a color for every girl out there.

Beyond these reasons I’ve been hearing a lot of buzz about the Kate Moss line. One of my favorite YouTubers has raved about them, and even a close personal friend of mine has told me how awesome they are. So I knew I just had to try Rimmel’s Lasting Finish lipstick out for myself.

While browsing the cosmetic isle of Walmart, I stumbled upon one shade that I’ve looked at several times before, but never actually purchased (#103), and another that I hadn’t seen because it seems to be sold out every store I go to. (#09)

Besides loving the colors of these two, which I obviously did end up buying for a mere five dollars each (what a steal! they are close to six or seven at my local Walgreens) I wanted these two specific shades because they were polar opposites, shade wise. Number 103 is a light mauve-ish pink, which number 09 is a deep wine/berry red color.

Now I haven’t actually used either of these lipsticks (yet) but I know I’m going to love them. For one thing they smell delicious. Normally, lipstick smells waxy to me. Almost like a crayon. But number 103 has a sweet watermelon scent, while number 09 has a deep raspberry or cherry scent (which normally I would detest! I don’t like cherry flavored/scented anything…with the exception of this because it smells like the fresh fruit as opposed to the artificial stuff).

As of lately I’ve been buying a lot of pinks and reds, which I like. But now that the summer months are fading into autumn I wanted some warmer shades to dress my lips with. Because I’m no beauty expert, and I’m not one hundred percent certain I can pull off more brown/neutral toned shades I decided to buy a few lipsticks for NYX.

I’ve heard a lot about NYX’s products, and I’ve heard mostly good things (again from YouTubers I follow like Samantha Schuerman, Melissa Raymond) about them. Because I heard such good things, and because I knew that NYX cosmetics are very reasonably priced, I decided to buy, not one, but two (and that doesn’t include the three lip glosses I purchased, which I’ll talk about later).

The Aqua Luxe lipstick  is super soft, and glides on seamlessly. Well, at least when I swatched it (I have yet to actually try it on my lips). Enchanting is simply dazzling. It’s a light copper color with a sheen of sparkles. For three dollsare I just had to have, not one, but both of these lipsticks! (I’m not actually going to show a swatch of this shade, because quite frankly the picture is awful, and you can’t really see the true shade. But you can get the idea from the below picture of the actual lipstick)

While I was in Ulta I came across the Essence display. I have never used Essence before. I haven’t heard a lot about it. But I picked up one of their lipsticks simply because … well I liked the color (first and foremost) and let’s be honest, it was cheap.  It was another three dollar steal. I bought it in the shade of Look At Me. Judging from the name you’d think that it’s a bold, statement shade of lipstick. But it is actually a soft neutral brown.

Onto the lip glosses (which is a term I’m using loosely here because they are all super pigmented, and feel more like a liquid lipstick if you know what I mean)

While in Ulta, while I was purchasing the two NYX lipsticks and the one Essence lipstick, I stumbled quite accidentally upon NYX’s butter gloss (there was a display steps away from the actual NYX case). There were a lot of pinks, and a few light red colors. But like I mentioned earlier I was looking for more brown/neutral colors, I found one number 07 Tiramisu, and it was a light beige color. It’s subtle, but quite beautiful.

Moving on to Target, which I was only in to buy stocking for my Halloween costume (I was Coraline), I made a brief pit stop in their cosmetic section. There I found two more NYX glosses (I didn’t realize that Target even sells NYX, my local one does not which I’m disappointed by). I bought a soft matte lip cream in number 08 San Paolo which is appears to be a cross between a brick-red and a deep rose-pink. Which seems like an odd combination, but actually works.

I also bought NYX’s Mega Shine Lip Gloss in Cosmo which is a true copper color with a bold shimmer.

Now both the butter gloss and the matte lip cream smell like frosting, but not the sickly sweet kind. I have a funny feeling it’s going to take some real self-control on my part to not lick this stuff off my lips ha ha. They smell just that good.

The Mega Gloss I purchased smells, once again, like cherry. But not the kind of cherry that I like, rather the artificial kind. But it’s not overpowering so it’s a smell that I could easily learn to live with.

To say the least, I’m super excited to try out these lipsticks. I may even write a review … or two about them!

Readers, what are some of your favorite lipsticks and/or glosses? Please share. Also if you want me to do a review on one of the lip products I talked about today, leave a comment or feel free to e-mail me at: BookBanditBeautyBasics@gmail.com

How are you on this lovely Tuesday? I hope everyone is doing well! I know I am, because I have some exciting news to share with everyone.

The BookBandit Blog is branching out!

What does that mean? Well it means that this blog, as it always has, will focus on books, but as of now, not just books. You see, I love reading, I love books, and I love sharing my thoughts/opinions with you readers. But I love a lot of other things, and want to share those things with you as well.

As you can tell from the above picture* The BookBandit Blog will feature weekly posts about everything and anything beauty related. I’m calling these posts: BookBandit’s Beauty Basics (thanks to the one and only Emma/Miss Print for coming up with such a catchy name!) . Once a week – every Sunday – I will feature posts about beauty related topics. I plan on featuring product reviews, monthly fave lists, beauty/cosmetic hauls, maybe a giveaway or two, and (don’t hold me to this) I’m going to try to feature interviews with beauty bloggers and/or vloggers!

At this point I just want to say a few things about my new blogging venture. I am in no way, shape, or form a beauty and makeup expert. I am not a certified or professional cosmetologist. I am just a woman who enjoys makeup. I enjoy playing with it, applying it (to my own face that is), and very obviously buying it.  I want you, dear readers, to know that first and foremost.

Besides that, I just want to take the time to mention, that yes I will be reviewing beauty/makeup products. I will not love every product I try. I will give an honest review, whether it’s good, bad, or indifferent. I want you all to know that this new blogging venture is simply to spread the joy of makeup. I am not being compensated in any way to post these views and opinions.

Readers, I hope you are excited about the BookBandit’s Beauty Basics! I have a lot of ideas, and I can’t wait to share them all with you! And please, if there’s a beauty/makeup feature you want to see covered, please either comment or feel free to e-mail at: bookbanditbeautybasics@gmail.com

*The above photograph was taken by me. It was altered by me using: Pixlr.com and Picmonkey.com Please do not “borrow” the above photo without asking permission first. That’s just rude!