Book Expo America is kind of a tradition for in real life bff and fellow blogger Emma (Miss Print if you don’t already know her) and I. After all, we’ve been going to the conference for several years together … tag teaming massive signing lines, scooping up highly anticipated books, and most of all making some great memories.

Being that the conference was in Chicago this year, I was honestly thinking that we wouldn’t be going. But after much thought I announced to Emma that I wanted to go. As much as I wanted to go to BEA16, I really wanted to go to Chicago. It’s one of those cities that I’ve wanted to see/visit for some time. And BEA16 was a good excuse. I wasn’t sure if Miss Print was going to come on this journey with me,  so when she said that she also wanted to come along, I was even more excited!

Because we were going to this exotic land, we knew we wanted to squeeze in some sightseeing around the actual conference.  Because of that, we decided to book our flight for early Tuesday (May 10th) morning. Admittedly a bit too early. Leaving out of Laguardia Airport meant that I had to be awake at the ripe hour of four a.m. . But looking back it was worth it. I

f we didn’t leave as early as we did we may not have had the chance to take in some really great sights like the Art Institute of Chicago …. which is the first thing we did after checking out our hotel. The Art Institute of Chicago is filled with some truly magnificent works of all. One of the collections that Miss Print was excited to see, and that I really enjoyed was the Thorne Miniature Rooms (for more info, click here).

Besides the Miniature Rooms we got the chance to see some very famous pieces – American Gothic, Nighthawks, and A Saturday Afternoon on the Island of La Grande Jatte.  In all honesty, I don’t know a thing about art. And art museums are often difficult for me because of my lack of knowledge and understanding. But going with Miss Print is truly awesome – not only do I get to see great works of art, but she also tells me all about these great pieces.

Besides the paintings, we got to see a paperweight exhibit. I know this doesn’t sound very exciting, but I really liked it. For some strange reason I really like paperweights (my uncle had one with a scorpion in it that I always played with).

After the Art Institute and a bit of a rest at the hotel we ventured out once again to find dinner and to take in some more sights. I’m going to say this now, besides the pizza (which I’ll get to later), I would say that most of our meals were pretty tasty. 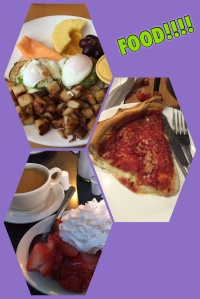 After dinner (and dessert of course) we walked around a bit and checked out the neighborhood in which we were staying. There was a bright green (though you really couldn’t tell that what with all the rain and fog) park across from the hotel we stayed out. We stayed right my Columbia U, and a two short blocks from Miss Print and I’s fave breakfast spot – Yolk!

With our first full day in Chicago coming to a close we headed back to the hotel and rested for the next three days that were ahead of us … BOOK EXPO!!!

May 11th was the first official day of BEA16. And because it was only a half day I think we all (meaning all those who attended) thought it was going to be the easiest and the breeziest of the three days. Well, we assumed wrong. It was actually busier than expected. Even though there weren’t many signings that day, there were a lot of drops and anticipated titles just calling to us from the exhibit hall floor.

But before the floor opened and before the books, Emma and I made our way the snaking line. While there we met up with our very lovely friend Cecelia (from The Adventures of Cecelia Bedelia).  It was great to catch up with her, chat, and just hang out with her! She’s awesome, and if you don’t already follow her blog, you should! 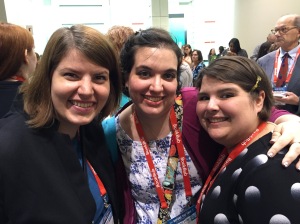 We also met up with Sajda (from Across the Words) who we soon found out was a conference pro!  I also had the chance to meet a few fellow bloggers on the line – I met Christina (from My Life in Books), Octavia (from Read. Sleep. Repeat who was also my former #OTSPSecretSister)

There were a few signings that day, the biggest being Mike Curato I think. If you don’t already know he writes/illustrates the very charming Little Elliot books. I mean his books are about a tiny elephant, what more could you want in a book?!

Because it was only a half day, Emma and I were able to leave early, head back to the hotel, rest a bit, and get ready for Portillo’s – a restaurant that Emma had urged us to go after finding out that they had a chocolate cake milkshake. We were meeting up with Cecelia and her friend Liza. Portillo’s wasn’t only delicious (the chocolate cake milk shake is the epitome of decadence) , it was a total trip.

There was SO MUCH going on. Besides the food, and the employees calling out orders, there were over the top displays with mannequins, and did I mention the milk shake made from chocolate cake?!

Dinner with Emma, Cecelia, and Liza was truly great! Admittedly I felt like the quite one of the group but it was nice to sit back and listen them talk about books that Iare so far our of my reading comfort zone.  And I learned a lot about water polo – a more violent sport than I had imagined.

To say the least it was a great end to a great first day of BEA16.

Day three was the second day of BEA16, and the first full day of the conference. There were even more books, even more friends to meet (I met Shannon from It Starts At Midnight, and who was my #OTSPSecretSister my first round, Val from The Innocent Smiley ) and of course more lines!  Some of the authors I had the chance to meet were: Chelsea Sedoti, Sharon Cameron, Zoraida Cordova, and of course my favorite … OLIVER JEFFERS!

After a long day of books, lines, and friends Emma and I knew it was time to check out Mellennium Park. 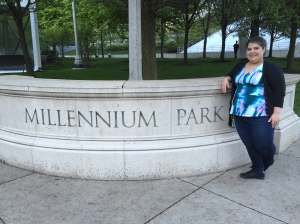 (Another pic snapped by Emma!)

It’s a beautiful park with an amphitheater and is home to THE BEAN.  This was one of those things that I really wanted to see in Chicago. But honestly, as cool as I thought it was before actually going to see it, it didn’t prepare for just how EPIC it was.

The Bean isn’t just a giant, kidney bean shaped, mirror work of art. It was so much more … Emma and I had such a great time taking silly pictures. Some of which you can see below. 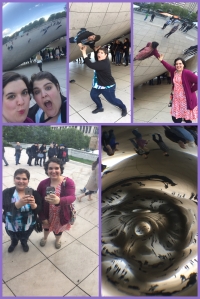 After Millennium Park Emma and I decided to go find some Chicago style deep dish pizza. Cause you know what they say  … when in Rome, do as the Romans do! I love pizza, and I had high hopes for deep dish pizza. A few blocks away from the park we found a Giordano’s that was relatively close. We decided to go there. I should have known upon arrival that things were going to be different … vastly different. The first thing they did was take our pizza order before we were actually seated at a table. Strange … I know! But they kindly explained that the pizza would take at least an hour to make.

Taking that long should have guaranteed us that it was going to be A-MAZING.  When an hour (and then some) passed, our pizza had finally arrived. It was a little daunting … and again strange having to eat it with a fork and a knife.  The pie itself wasn’t huge width wise, but in depth it was huge. Even if I could pick it up to eat it as one is supposed to eat pizza, I don’t think it would have fit in my mouth.

Taking the first bite was an interesting experience. I love cheese, but found it was just too much — even for me! The sauce, which tasted fine, was on top when it should have been below the cheese. And the crust (one of my favorite parts of the pizza) was just too doughy.

I managed to eat two pieces. I had to be sure how I felt about this thing Chicago residents call pizza. To be frank, I didn’t like it. It was cool to try it, and experience Chicago style pizza, but not something I’d willingly eat again. Sorry.

By day four (or three of BEA16) I think it was safe to say that both Emma and I were starting to feel the burn. But we woke up early, heading to McCormick place early in the hopes of scoring tickets for both Marissa Meyer and Maggie Stiefvater’s signings later that day. The Marissa Meyer tickets went super fast. Seriously. It felt like I blinked and the tickets were gone. But Emma and I were able to score tickets to Maggie’s Stiefvater’s signing. Which was exciting in and of itself.

At the top of the day Delacorte/Random House was dropping Nicola Yoon’s upcoming The Sun is Also A Star. For some inexplicable reason, I needed this book! Besides the fact that, judging from the summary, it sounds like a “me” book.  The line was crazy long, but somehow I managed to get pick up a copy before they ran out!  Just see for yourself:

But the best part of this story of scoring The Sun is Also a Star was this: while waiting on line for a drop, I met author Nicola Yoon! And she was so nice … seriously I asked if she would signing my ARC there, and she did!!

The last day of BEA16 was the day of lines. It started with the line pictured above. Then with Maggie’s line. And then Kendare Blake’s massive line. But I’m happy to report that we conquered them all. Though, Kendare Blake’s line was a bit touch and go there for a while.

All of the authors were super nice, and it was so awesome to meet them. All the books have quickly became books that I am even more excited about reading (I read four so far!). And I’m happy to say that BEA16, Chicago style was success.

And just for fun, here are some extra pictures from BEA16:

BEA16 was a great experience. And I am once again to have had that experience with bff Emma! Thank You to all the authors and publishers. To the many fellow bloggers and new friends, it was awesome to meet you all! We’ll have to do it again.  Chicago, it was real, but at the end of the trip I was happy to return home to good ol’ New Jersey!

If you want to check out what books I picked up, check out my post here.