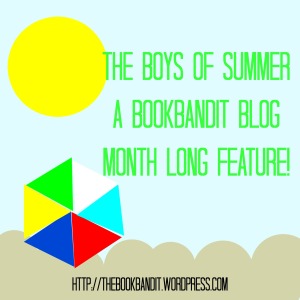 I know, I know …. it’s been some time since I posted a Boys of Summer post. Somehow summer got away from me – I do apologize.

But I’m finishing off the summer with a bang (I promise). Today I’m featuring, not only a fellow blogger, but also my real life BFF Emma, aka Miss Print (who, let’s be honest is no stranger to the BookBandit Blog!)

Emma has put together a great post, and I’m super excited for all of you to read it. It’s definitely a list for all of your fantasy loving hearts!

Romantic Fantasies to Read this Summer

Everyone loves a romantic story. Here are ten of my favorite fantasy ones (and a couple of sci-fi stories too) to help you kick back this summer and get in maximum swoons:
Those are ten of my all-time favorite romantic fantasies. Are any on your list?
***
Seriously, how great is that post?! I’m not even a big fantasy fan and I’m running to Goodreads and adding them to my shelves!
A big THANK YOU to Emma/Miss Print for always participating in my blog features, and for really a truly great post! Readers, be sure to check out Emma’s fantastic blog Miss Print!
Widgets