I’d like to say that Day 2 (Friday) of BEA14 started off with a bang, but I’d be lying. Instead it started with a small dose of dread. Why, you ask? Well, Miss Print and I were in for a long – no, wait – a VERY long day. Besides taking part in all the BEA14 festivities, fools that we are Miss Print and I decided that after the conference we’d go to a book signing!?!

Friday brought with it, not only a twelve plus hour day (where Miss Print and I found ourselves on our feet for the most part of the day), but more author signings, more books (especially since we fools actually brought books with us), and more BEA14 craziness.

Once again, Miss Print and I – very briefly – found ourselves separated at the start of the morning. As soon as the exhibit hall floor opened we rushed in, me heading towards the MacMillan booth in the hopes of scooping up, quite possibly the cutest tote I’ve ever seen – the Little Elliot tote bag. After getting one of these totes I made my way over to the Abrams booth where I would be, not only meeting back up with Emma, but also waiting on line to meet A.G. Howard.

I am a huge fan of A.G. Howard’s. Not only did she retell my most favorite book (Alice in Wonderland) but she put her own spin on it. Splintered was one of the most unique books I’ve read to date. So obviously I was super amped up to get a signed copy of Unhinged (book two of the trilogy). A.G. Howard (as I expected) was super cool and super sweet. She’s definitely on that list of best authors I’ve met!

After the super cool A.G. Howard Emma and I had some free time so we wandered about the exhibit hall. We tried to hit a few drops but unfortunately our timing was off and we missed.  One of those drops was a Harper drop for Falling Into Place by Amy Zhang, Tape by Steven Camden, The Swap by Megan Shull – for the life of us every single time we tried to catch this drop we would miss it for one reason or another. Seriously, it was becoming a point of pride at some point. But we stopped by Harper’s booth to see what was what, and the strangest thing happened.

Emma and I are standing there chit chatting and a girl walks up and asks if there were tickets left for the Kiera Cass signing taking place later that afternoon. There were – tons of tickets left! Here’s why I find that so strange – Kiera  Cass and her Selection trilogy is super popular (I cannot wait to settle in and read them now that I have all three!) I (wrongly) assumed those tickets would have been long gone by this point. Afterall it was easily an hour after the exhibit hall opened.

With this tidbit of info Emma and I figured why not!? So we asked and we both had our very own Kiera Cass tickets! We felt very accomplished!

After this chance score, Emma and I headed back into the autographing area for Mike Curato whose picture book Little Elliot in the Big City is quite possibly the cutest book I’ve ever laid eyes on. Seriously, I’m not joking. Emma was over the moon excited about this book. Her enthusiasm and excitement was infectious! Mike Curato was super cool to meet! I’m glad that I had the chance to, not only get a signed copy of his picture book, but to meet him. And I have Emma to thank for that! Thanks, Emma!

Now readers, this is the part of the post where I get real with you: I judge books by their covers. And when I saw the cover for The Jewel by Amy Ewing I knew I had to have this book. It’s stunningly gorgeous! So knowing that I had to have this book Emma and I found ourselves waiting on Amy Ewing’s overflow line. The cool part about waiting on an overflow line: I got to hold a sign for a short period in time.

After my sign holding responsibilities (which I took very seriously by the way) I finally made it to the front of the line where I got to meet Amy Ewing and where I gushed over her beautiful book.

After Amy Ewings line Emma and I had planned to hit a few more autographing sessions, but all the lines were just too long. So we decided then and there that lunch was needed, especially for the afternoon and evening we had coming up.

While on our lunch break (after the eating and the sitting) we made a quick pit stop at one of the restrooms. It was on that line that I had a lovely conversation with a lovely woman about her lovely shoes. I didn’t think much of this conversation. Nothing more than bathroom line chit-chat.

Not thinking much of this conversation, Emma and I made our way back to the exhibit hall and back to the autographing area where we patiently waited to meet author Chelsey Philpot. We waited, and waited and waited. Emma even had the chance to be the sign holder this time! 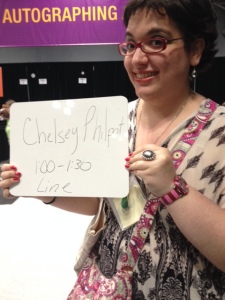 After waiting it was finally my turn to meet Chelsey. Upon seeing each other we realized that just moments before we were chatting … on the bathroom line! How crazy is that! Chelsey was super nice, and we’re totally friends now (ha ha ha).

After Chelsey’s signing I made it my business to hightail it to the line that I knew was forming for Holly Black. This year, Holly was a top priority. I didn’t care if I missed everything and anything that day, so long as I got to meet her. So Emma and I made our way over to her table – two hours early – and found ourselves not on the first line but the second overflow line.

Yes, we waited for two hours. My feet hated me, but I was still super excited. As you can tell by this picture that Miss Print snapped of me while I was on my second round of sign holding duty:

The wait was totally worth it! I was in fangirl heaven meeting Holly. As always (yes, I’ve met her a time or two before this) she was so awesome cool! And she had the hair to prove it! 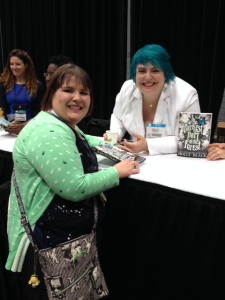 After meeting Holly Emma and I rushed over to Harper’s booth to meet Kiera Cass and get a signed copy of The One. I’ll admit I haven’t read the first two books in the trilogy – yet – but I was still excited. I have to say – Harper was where it was at this year! They were so pleasant, they were so helpful, they were so organized! Harper, you guys rock! Seriously!

I got to meet Kiera, I got a signed copy of The One, and if all that wasn’t great enough I got to take a picture with her! 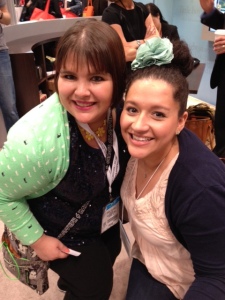 Don’t you just love the mint flower in her hair?!?!

Besides all that wonderful-ness Harper was even giving out these beautiful cookies (beautiful and yummy!) 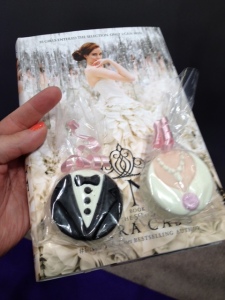 After this, Emma and I found ourselves parting ways. She was meeting up with Cecelia and Ginny to tackle the Scott Westerfeld line, which I was going to Molly Idle’s line.

As you all know I’m a picture book fan. What you may not know was that since reading Flora & The Flamingo author/illustrator Molly Idle has quickly become a favorite of mine. Her books are breathtaking. So knowing that she was going to be a BEA14 I had to meet her… I just had to.

And I did. We chatted for a short bit, she signed a copy of Camp Rex for me, and we even took a picture together.

Even though BEA14 day two was coming to a close, our day was far from over. After BEA14 had closed it’s doors for the day Emma and I cabbed it from the Javits Center to Books of Wonder where we had the chance to see some really great authors – Maggie Stiefvater, Gretchen McNeil, A.G. Howard, Garth Nix, Alethea Kontis, etc..

I’m not going to go into too many details because this post isn’t about the signing, it’s about BEA14. But I will say this: it was a great signing, and I got to talk to Gretchen McNeil about exorcisms — it was awesome!

After a long day and what seemed to be a longer night we made our way back to Emma’s house where her and her mother so graciously opened their house to me for the night. I think it was safe to say that the minute our heads touched our pillows we were fast asleep.