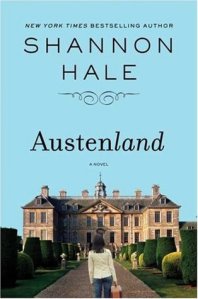 Jane Hayes is a thirty-something year old harboring a deep, not so dark secret. A secret, that if found out, would turn her several shades of red. A secret that no one, from the outside looking in, can possibly guess.
Unless you’re Jane’s Great Aunt Carolyn.
After one very awkward lunch with her mother and her detail oriented great-aunt, Jane’s secret is embarrassingly uncovered. Jane’s obsessed with Mr. Darcy and the idea that every man should possess those irresistible Darcy-esque qualities. But she isn’t obsessed with any old Mr. Darcy. No! Jane finds herself pining for and fantasizing about Colin Firth’s portrayal of Austen’s famed male character.
But when Great Aunt Carolyn dies just a few short weeks after their awkward lunch, Jane finds out that Great Aunt Carolyn has left her an all expense paid vacation to Pembrook Park – a place where Jane will get to live out her Austen/Mr. Darcy fantasies alongside other Austen-obsessed folk.
But will she find her Mr. Darcy?
Austenland, written by famed young adult author Shannon Hale, is a quirky realistic read, that will leave readers laughing and hopeful that their own Mr. Darcy fantasies will come true.
I haven’t read many of Hale’s books. I’ve only read two, and like those Austenland is exceptionally written. It’s descriptive. Hale immerses, not only her characters, but also her readers into this Austen inspired world.  Reader will not have a hard time imagining the Regency Era life, they will not have a hard time imagining the emotions that Jane experienced, they will not have a hard time imagining the heated romance blooming.
What makes Austenland such a well written book isn’t just the words on the page. It’s the fact that Hale nailed the language, and seamlessly wove the language of today with the language of yesterday. This lends to the authentic feel, and makes Austenland even more believable.
But the writing isn’t the only thing that makes this quirky book a real hit. Hale’s cast of characters breathe life and laughter into this novel. Especially leading lady Jane, who seems like any other normal thirty-something year old who just happens to be looking for love in all the wrong places. Reality is, Jane is far from normal (and that’s meant in the best way possible!). She’s obsessed, not only with a fictional character but the idea that every man should embody the traits of this fictional man.
Not only obsessed, but Jane is real. And as if that wasn’t enough for a main character she is relatable. Especially to us thirty-something year old girls who are still trying to find themselves in this crazy, fast-paced world.  What makes her so relatable are her flaws. Jane isn’t afraid to make mistakes, nor is she afraid to laugh at herself and some of the ridiculous situations she finds herself in. And those situations … completely ridiculous but laugh out loud funny.
Yes, Austenland is full of great writing and characters that fit perfectly into this vivid plot. But reading this, something felt off. At first I couldn’t put my finger on it, but as I read on I found that the pacing was off. There were moments that were full of fast paced excitements. But where were even more moments that slogged by, unfortunately dragging the book down a bit. For me, personally, the third person narration really caused this pacing issue.
Even though the pacing was off, it wasn’t enough to make this book a bad read. In fact, I really enjoyed Austenland. It was a fun romp into Austen’s Regency – era life. This short read will not only capture reader’s attention, but ultimately their hearts.
Widgets