As you know my bff and fellow blogger Miss Print and I hosted our very own swap. This past November we hosted the Book Bloggers Giving Thanks Box Swap. Now, while we didn’t get hundreds of sign-ups, quite a few of you did sign up! And I gotta tell you, it was so much fun!

For this swap, I swapped with Andi of Andi’s ABCs.  I  had such a blast putting together a surprise for Andi. But I’m not here to talk about what I gave Andi, instead I’m going to talk about the awesome box that Andi gave me! But before I share that with you readers, I just want to say THANK YOU to Andi, not only for participating in our box swap, but for the super cool, super generous gift! You are awesome! 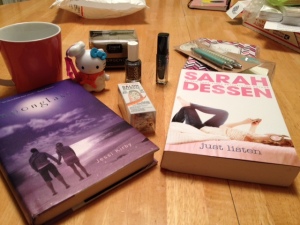 As you can see from the above photo, Andi gave me two books: Moonglass by Jessi Kirby and Just Listen by Sarah Dessen. After reading Kirby’s Golden I knew I just had to read the rest of her work. So when I opened my box from Andi and found this, I was overjoyed! I’m so stoked to read this  — vacation time can’t come soon enough.  I haven’t read any of Dessen’s books. But I’ve met her on two occasions and I have to say, she’s quite possibly my favorite author that I haven’t read. She’s so sweet and great to follow on Twitter (seriously, if you don’t already follow her, you should). But for whatever reason I haven’t read a single word of her work. Well, now that I own Just Listen, I plan to fix that problem.

Besides the two books Andi gave me some other awesome stuff. In my box I also found a beautiful coral colored mug, a stripe-y notebook and two pens (which I plan on putting to good use), a Hello Kitty clip (which I will add to my Hello Kitty figurine collection), two different nail polish (one a beautiful shade of blue, and another sparkly silver … you know I love me some sparkles!), and an emergency kit for women (which includes a whole wealth of just-in-case goodies like a safety-pin, a mint, etc..)

Isn’t it all so awesome. Better yet, isn’t Andi awesome! Thank You so much Andi, I truly you hope you loved all of your goodies as much as I love mine!

I’ve been participating in several swaps, all of which will be blogged about soon. While you’re waiting for those posts to go live, I think you should check out both of my giveaways. And you should totally enter both of them! Wrapped Reads Giveaway (#1) and BookBandit Beauty Basics Giveaway.