This Is W.A.R. by Lisa and Laura Roecker 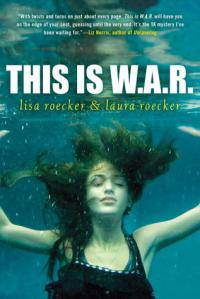 When Willa Ames-Rowan’s blue and limp body is pulled from the depths of Hawthorne Lake everyone knows her death wasn’t an accident. Rather it was a murder, covered up and made to look like an accident.

Best friends Lina and Sloan know that Willa’s drowning wasn’t an accident, what with Willa being a champion swimmer. Sister Madge knows it too. But what she doesn’t know is why James Gregory, heir to the richest man alive, would kill her. Even Rose, someone on the outside always looking in, knows that Willa was a survivor.

Hell bent on uncovering the truth, Rose, Lina, Sloan, and Madge join forces to form the W.A.R. . Pooling their resources, the girls scheme up ideas to seek the Ultimate revenge: take Killer Janes Gregory down while disgracing and dishonoring the family’s name.

This is W.A.R. written by authors Lisa and Laura Roecker is a murder mystery set against the lush backdrop of a high society county club. It’s a somewhat predictable story, but still one that will keep readers engaged and second guessing.

Lisa and Laura Roecker’s writing isn’t only solid, it’s also seamless. Co-written books sometimes feel disjointed, as if each writer is writing their own side of the story, never pinning down one voice. But this isn’t the case for This Is W.A.R. . Readers will not be able to tell which writer is writing which part, and that’s a good thing.

Broken down into several parts, each main character – Rose, Lina, Sloan, and Madge – get to tell their sides of the same sordid story. But beyond that, readers get the chance to know these girls, to understand and sympathize with them, but above all things will get the chance to see the part each girl played in Willa’s very untimely death.

Lina, who often appears emotionally adrift turns out to be the most emotional of them all.

Sloan, who is often looked at as the “dumb” one of the group may not be as book smart as the rest of the group, but she proves to be a perceptive ally who has a real knack for quick thinking.

Rose, unlike Lina, Sloan, and Madge didn’t know Willa well. Joining forces with the W.A.R. means finding out who she is, and finding her place among the world she assumed she wasn’t really apart of.

Lastly, there’s Madge. The girl who lost more than a friend that night, she lost a sister. Madge is a strong willed character with a short temper. A dangerous combination when seeking revenge. Readers get the chance to, not only learn about who Madge is without Willa, but who she was with her.

There’s a lot to really enjoy and like about Lisa and Laura Roecker’s latest novel. However, though solidly written, This Is W.A.R. is somewhat predictable, and it isn’t just because reader’s are told from the get-go who killed Willa. I’m not much of a mystery reader. I have no patience to find out the who, what, and whys, I like to know whodunit from the start. For me, those predictabilities were welcomed. But mystery fans may not welcome the predictable moments as easily or readily as me.

This Is W.A.R. is an enjoyable, character driven book, that will ultimately leave readers questioning high society and the many injustices of the world we live in.