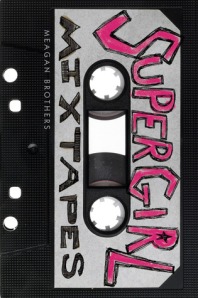 Sick of being a small town girl, Maria longs to move away from her South Carolina town and all the demons that come along with it. All she wants is to move to New York City with her free-spirited artist mother.

After suffering a bout of depression, moving away is what Maria thinks is best for her. So when her overprotective father finally agrees to let his daughter move several hours away, she’s overjoyed.

Ready for the hustle and bustle of New York City, Maria packs her bags, takes the train, and ends up spending the better part of the day sitting on a bench in Penn Station, waiting for the mother barely knows.

As New York City becomes home to Maria, she often finds herself with more freedom than she’s ever been used to. Spending her days skipping school and walking the streets of the City, Maria is immersed in a world of both art and music.

Even though New York City is everything she dreamed it would be, freedom and fun, Maria often finds herself alone, struggling to get to know her still absent mother.

As Maria’s dreams of New York City begin to come true, she soon learns that dreams sometimes turn out to be nightmares.

Seamlessly weaving music into a plot line, Supergirl Mixtapes is well written. Brothers writing is simple yet strong, inviting and conversational. So much so that Supergirl Mixtapes often reads like a friend who is telling you a very personal, very honest story.

Supergirl Mixtapes is a character driving story. Main character Maria is the kind of character that, despite being well crafted, is very obviously flawed. Her flaws make her real. Readers will appreciate that Maria is perfect, that she makes mistakes – frequently – just like the rest of us.

Even though Maria is likable, easy to sympathize with, and a character that readers will want to see come out on top, she isn’t a character to be defined as a heroine. Maria often turned a blind eye to bad situations instead of facing them head on. But again, these are the kinds of flaws, the kinds of reactions real people would have to the kind of situation Maria has found herself in.

What I personally, love, love, loved about Brothers latest novel, Supergirl Mixtapes, was the use of music. Music played a very prominent role in the book – it fueled both Maria and the plot.

Supergirl Mixtapes was a really great read. One that’s quick to get through, and easy to enjoy. But like its main character it too had some (very) minor flaws.

As a reader I had a very difficult time pinpointing a time frame in which Supergirl Mixtapes was set. At times it felt like it was set in the eighties, other times the nineties., and still there were times it felt as if it was taking place in the here and now.

Beyond that, I felt that Supergirl Mixtapes, though a thoroughly enjoyable read, wrapped up a bit to neatly. There were some messy situations: drug abuse, absentee parenting, etc., that ultimately were left unresolved, left for the readers to figure out.

Yes, I had some minor issues with Supergirl Mixtapes, but not enough to say I didn’t really like this book. Supergirl Mixtapes truly was my kind of book – one that’s filled with both ups and downs, and fueled by music.