It’s 2013, and what better way to kick things off than by participating in a giveaway hop! I’m participated in the New Year Giveaway Hop hosted by Kathy over at I Am A Reader, Not a Writer and Babs Book Bistro. 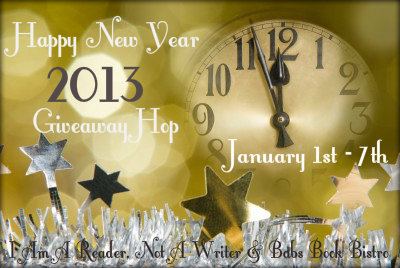 I’ve been participating in a lot of hops lately, so readers you’re probably wondering what do I possibly have left to give away?! For this hop I’m giving one lucky winner the chance to win this:

A (used) ARC (advanced reader) copy of Maureen Doyle McQuerry;s The Peculiars and an assortment of bookmarks.

Now, onto the fine print. The contest is open to U.S. residents age 13 years or older.

Giveaway is open from 12:01 a.m. on January 1, 2013 and will run until 11:59 p.m. on January 7th. To enter simply leave a comment on THIS POST ONLY telling me what 2013 book you are most looking forward to read. (In case you wanted to know, I have many 2013 books I’m looking forward to, one of which is Maureen Johnson’s The Madness Underneath).  When leaving a comment, please make sure to leave a valid e-mail address.

Winner will be selected via random number generator and will be notified via e-mail on January 7th. Winner will have two days until January 9th to respond to e-mail with mailing/shipping information. However, if that information is not received by that time, I will have to select a new winner.

As always there are a ton of blogs participating in this giveaway hop. Be sure to stop by and check them all out here.

2012 was a record year for reading, at least for me it was. I’ve read some really great books, and I’ve read some not so great book (at least in my opinion). This year I decided to change things up a bit. I decided that I wouldn’t limit or restrict my top ten lists to books only published in 2012, instead any book I read during this year would be fair game.

So without further adieu, here’s my best of/worst of 2012 lists:

10. The Dark Unwinding by Sharon Cameron

8. The Disenchantments by Nina LaCour

7. Keep Holding On by Susane Colasanti

6. The Raven Boys by Maggie Stiefvate

5. The Best Night of Your (Pathetic) Life by Tara Altebrando

4. Where Things Come Back by John Corey Whaley

2. The Diviners by Libba Bray

1. The Fault in Our Stars by John Green

Because I read so many great books, and had a VERY difficult time narrowing down this list, there are, of course, several honorable mentions:

The Curiosities by Maggie Stiefvater, Tessa Gratton, and Brenna Yovanoff

The Queen of Kentucky by Alecia Whitaker

9. Dangerously Every After by Dashka Slater

1. The Insomniacs by Karina Wolf

The Monster’s Monster by Patrick McD0nnell

The Cloudspinner by Michael Catchpool

So even though I didn’t reach my reading goal, and I slacked off with blog posts (which I promise you readers, I will not do in 2013) I did read a lot of great books. And here’s hoping to many more great ones in 2013!

I read a lot of great books in 2012! To celebrate all the great books – the ones I’ve read and the ones I’ll eventually get around to – published in 2012 I decided to partake in another giveaway hop. Obviously I love these hops! I get to give away great books and you readers get the chance to win some!

I will be participating in the Best of 2012 Giveaway Hop hosted by Kathy over at I Am a Reader, Not a Writer. 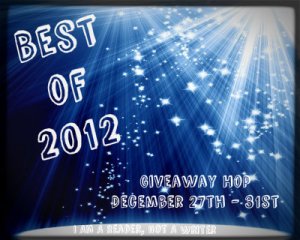 This hop around I’ll be giving one lucky winner the chance to win this: 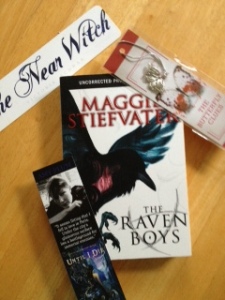 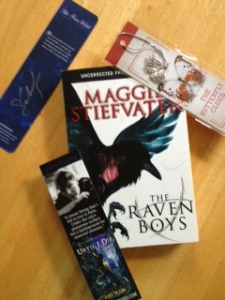 A (used) ARC (Advanced Readers Copy) of Maggie Stiefvater’s Raven Boys. And it just so happens that this ARC is signed by Maggie herself! Of course, as always I will include some bookmarks – an Until I Die bookmark, a Near Witch bookmark signed by author Victoria Schwab, and a Butterfly Clues bookmark.

Giveaway is open to U.S. Citizens ,13 years old and older.

To enter simply leave a comment on THIS post telling me what your favorite read of 2012 (that is, published in 2012).  When leaving a comment please make sure to leave a valid e-mail address. Winner will be contact via e-mail on January 1st. Winner will have two days, until January 3rd @ 11:59 p.m. to reply to e-mail with shipping/mailing address.  If response isn’t receive by January 3 I will have to select a new winner.

Please stop by the other blogs that are participating in the Best of 2012 Giveaway Hop.  You can check them all out here.

Last but certainly not least THANK YOU to Kathy over at I Am A Reader, Not a Writer. Not only for this great giveaway hop, but for all the hops she hosts!

So if you read my post a week or so ago about the Cold Nights, Warm Books Holiday swap, you (should) already know that I participated in three different book blogger holiday swaps.

I once again participated in the Holiday Swap. Looking forward to the familiarity of it in the midst of all the new holiday swaps I was participating in I was really looking forward to it. But when I signed up, I soon realized that things would work differently this year. It was a bit confusing but by the end everything worked itself out.

Now, as any normal secret santa swap would go I was anxiously anticipating to see, not only who had me as their secret santa, but if the book blogger I was giving to had received her gifts. I quickly found out this past Friday who had me.

As it turns out my good, real life friend Emma (Miss Print, in case you didn’t already know) had me. It’s a small world, isn’t it?

To say the least, I was surprised.

Emma spoiled me! Really, she did! From her, I received:

One of my newly deemed most favorite books, The Perks of Being a Wallflower by Stephen Chbosky (the movie tie-in edition), an ARC of Tiger Lily by Jodi Lynn Anderson, a book I’ve coveted since I first heard about it. A Hello Kitty Momiji doll, and two decorative boxes: a beautiful snowman and a teeny tiny own that houses an even teenier, tinier horse.

(Personally, I think the owl ate the horse hee hee!)

As you can tell by this post, Miss Print was very, very generous. To my real life friend Emma, I just want to say Thank You! Not only for the pos-i-tutely awesome gift, but for being a great friend! That’s the best gift I could ever ask for!

On a final note, I hope all of you, my readers, followers, subscribers have a very happy and a very healthy Holiday season full of love, laughs, and of course good books!

It’s holiday hop time! I’m once again participating in the Mid-Winters Even Giveaway Hop hosted by Kathy over at I Am A Reader, Not a Writer and Oasis for YA (Thanks a Bunch!!!)

This hop around I am giving one lucky a chance to win this:

A (used) paperback copy of Nevermore written by author Kelly Creagh. As always, I will also include an assortment of bookmarks. (Afterall, what’s a book without any bookmarks!)

To enter this giveaway hop, please leave a comment on THIS post telling me why or why not winter is your favorite season. When posting your comment please remember to leave a valid e-mail address.

As always there are a number of great blogs participating, all of which are giving away a chance to win some great prizes. Make sure to check them all out here!

The Best Night of Your (Pathetic) Life by Tara Altebrando

High school. It’s the best of times. It’s the worst of times. At least that’s how Mary and her group of misfit friends – Patrick, Dez, and Winter – viewed it these past four years.

Now just a week shy of graduation, Mary’s ready to put aside all the Model United Nations meets, the after school band practices, and one very embarrassing moment at prom, for one night of unadulterated night of high school hijinks.

The senior scavenger hunt is Mary’s chance to, not only drive around Oyster Point aimlessly and collect the most random objects (from a dixie cup icosahedron to a fettling knife), but to prove herself.

But when the scavenger hunt and emotions spin wildly out of control, Mary is forced to not just play the game, but to face realities that she’s trying desperately to avoid. Will she survive, or will the hunt, the antics, and the emotions get the best of her?

The Best Night of Your (Pathetic) Life, written but author Tara Altebrando, is a whirlwind book that takes readers on a twenty-four hour journey packed with action and adventure.

The Best Night of Your (Pathetic) Life may be short, but it certainly does not lack. Clocking in at only two hundred and thirty-nine pages, readers will find plenty of laugh out loud moments, plenty to reminisce about, and writing that packs a real punch.

Altrebrando’s writing isn’t only strong, it’s spectacular. She has a knack for luring readers into her plot. The Best Night of Your (Pathetic) Life is an engrossing story that is chock full of characters that are both memorable and authentic. Mary and her team of misfits are characters that are multidemensional.

As an adult reader, what I really loved most about Altebrando’s latest book is all the emotions that are tied to and stirred up by it. There were moments that I longed for my high school days, and others that had me wishing my own high school experience including a twenty-four hour scavenger hunt.

Altebrando’s The Best Night of Your (Pathetic) Life is the kind of book that readers will not be able to walk away from. It’s a really great read that will keep readers laughing, loudly, and will satisfy any readers tastes.

Not just to be jolly, but to get and (of course!) give gifts!

In the spirit of the holiday season, I normally participate in at least one book blogger holiday swap. This year, I decided to spread the holiday cheer and participate in three different swaps. One of which was the Cold Nights & Warm Books Holiday Swap hosted by Squeaky Books.

As any swap would go, I was assigned a Santee which I so happily put together a gift I hoped she would love.  In the meantime someone else had me as their Santee, and as of today I received the swap gift they so generously and so thoughtfully gave me.

Beverly from Book Lady Book Notes got me, not one but three (3!) books: Social Suicide by Gemma Halliday, The Luxe by Anna Godbersen , and Beautiful Creatures by Kami Garcia and Margaret Stohl.

Besides the awesome books, Beverly also gave me a glass with beautifully hand-painted flowers on it, and a hand knitted, cream-colored infinity scarf (Beverly, how did you know! I’ve been wanting/searching for an infinity scarf for a year!). 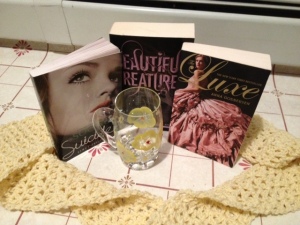 I just want to say THANK YOU to Beverly for giving me such a thoughtful gift. I love it all, and I can’t wait to read all of the books!

Hope everyone else who participated in this holiday swap received gifts as great and as thoughtful and as generous as the one I received from Beverly!

There was an error retrieving images from Instagram. An attempt will be remade in a few minutes.

The BookBandit Blog
Create a free website or blog at WordPress.com.